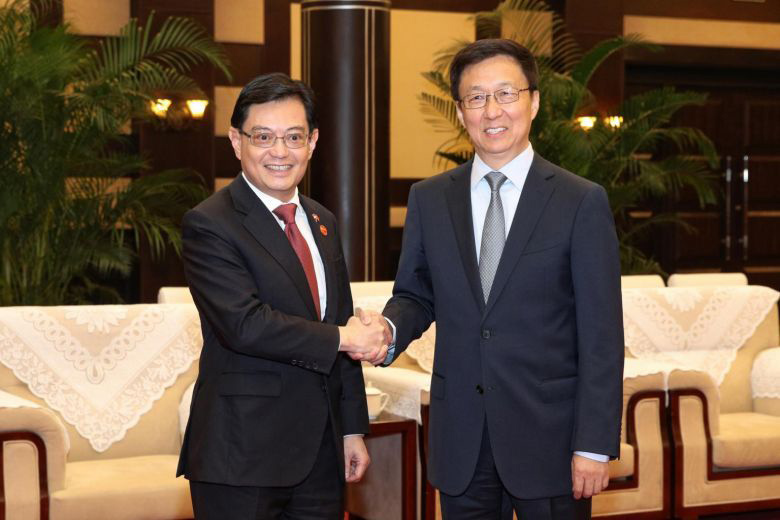 CHONGQING • Singapore and China have inked as many as nine agreements at their latest apex bilateral meeting, held for the first time in the south-western Chinese city of Chongqing.

The two countries signed a raft of pacts - from Customs twinning to a smart city project in Shenzhen and a youth internship exchange programme - at their 15th Joint Council for Bilateral Cooperation meeting.

The substantial number of deals - up from seven signed at last year's talks - could be seen as a sign of a new chapter in the relationship between the two countries, as Singapore transitions to a new generation of political leaders.

Referring to the 30th anniversary of relations between Singapore and China next year, Mr Han said there were a lot of expectations about this year's meeting as the two countries face common challenges amid a wave of protectionism and anti-globalisation sweeping the world.

With China facing a prolonged trade war with the United States and Singapore's economy flatlining, there is greater impetus for both countries to cooperate economically, say analysts.

Mr Heng, who is co-chairing the council for the first time, said both countries attach great importance to the annual summit, which is reflected by "the high-level representation and substantial achievements" of the projects.

Referring to the significant number of fourth-generation leaders from Singapore attending the meeting, he said their presence will hopefully "pave the way for the next generation of leaders to strengthen our bilateral relationship".

Among the agreements signed was one between Singapore's Ministry of Communications and Information (MCI) and the Shenzhen government on a smart city initiative that will connect business ecosystems and promote links between people and businesses from the island-state and the Chinese technology capital.

MCI said in a statement that the projects under this initiative will be in areas like digital connectivity, talent exchange and development, and innovation and entrepreneurship.

Singapore aims to be the world's first smart nation.

Another agreement is for internship exchanges for students and recent graduates of polytechnics and universities.

To be launched next year, the programme will allow up to 500 Singaporean full-time students and recent graduates each year to work at a China-based company of their choice for up to six months. Chinese students will also have similar opportunities.

This is the first bilateral internship exchange scheme that Singapore has with another country, and Singapore is the first Asian country to have such an arrangement with China.

Singapore Customs and its Chinese counterpart also signed a deal for smoother Customs clearance for Singapore's intergovernmental project in Chongqing.

It also includes enhancements in investment protection, Customs procedures and trade facilitation, trade remedial measures, as well as commitments in new areas such as e-commerce, competition and the environment.

The free trade agreement has existed since 2009 and was China's first comprehensive bilateral free trade pact with an Asian country.

Negotiations for its upgrade started in 2015 and took eight rounds of talks over three years.

In another announcement, China's central bank agreed to grant a settlement agent licence to DBS, which will allow it to trade, settle and provide custody for interbank bond market instruments on behalf of foreign investors.

The oldest of the three, the 25-year-old Suzhou project is moving beyond its brick-and-mortar industrial park beginnings, with Singapore now stepping in with professional services, intellectual property management and financial services to support Chinese companies to go global.

In the innovation space, Singapore's Agency for Science, Technology and Research (A*Star) will have its first foreign outpost, called the A*Star Partners' Centre@SIP, to facilitate partnerships between Singapore and Chinese companies.

Tianjin Eco-city, which now has 8,200 registered companies and over 100,000 people living or working in its 30 sq km area, is now developing into a smart city, with pilot projects such as for autonomous public buses and smart carparks.

Singapore and China are also looking to replicate the eco-city's model in other Chinese cities and Belt and Road countries.

Chongqing is a relatively new focus and is Singapore's effort to plug into China's ambitious Belt and Road Initiative (BRI).

The two countries are working on a long-term project that will connect the less-developed western region of China to the rest of the world.

Singapore is providing modern services in the areas of logistics, financial services, aviation and information and communications technology.

The two sides are also working on a trade corridor that will integrate western China with South-east Asia by connecting Chongqing to Qinzhou in Guangxi by rail, and to Singapore and beyond by sea.

China's BRI is a signature project by President Xi Jinping, whose vision is to create a 21st century Silk Road of overland corridors and shipping lanes.